Ostia, which is Latin for “mouth”, is a city located at the mouth of the Tiber River, around 30 kilometers from the west of Rome. Legend has it that it was established by King Ancus Marcuisto in the 7th century B.C. that the city changed from a naval base and military harbor to a commercial harbor. Today, it serves as a reminder of how Ancient Romans built cities as visitors can stroll through many historic buildings like a bakery or a public toilet. 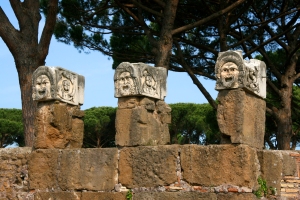 While it is interesting to know that Ostia Antica served as Rome’s first port, it is fascinating to realize that the port that followed sits under Rome’s Fiumicino Airport, today. As Ostia acted as a major port to Rome, one could only imagine the diverse variety of goods and products that poured into this rich society. In Ostia, it is possible to view a multitude of small sectional rooms that sit side by side. These rooms acted as a station or stall where the vendor would sell his goods. Depending upon what the vendor’s specialty was, the marble mosaic flooring in his room would display just this. Thus, if he sold fish, the mosaic would display a beautifully-patterned fish in the form of a mosaic (These artistic floors represent only a fraction of the many that exist in Ostia).

Interestingly, most of the buildings visible in Ostia Antica were actually built before the city’s decline after the Severan dynasty’s political chaos. Once the economy collapsed, the city’s building activity decreased. Old bricks, inscriptions and marble facing were dug up later during the Middle Ages and Renaissance period to be reused in making new buildings. Therefore, even the relatively newer buildings are actually still old.

In the fifteenth century, the Castle of Gregoriopolis was rebuilt by Cardinal Giuliano della Rovere to protect Rome. However, his efforts were deemed useless when the Tiber changed its course, cutting the castle off. This old branch is now filled with mud, inspiring residents to call it Fiume Morto or the Dead River. From then and all the way to the eighteenth century, the area was pillaged and many inscriptions and statues from the ruins ended up in private collections across Europe and later in national museums.

As Ostia belonged to the Vatican at the time, the first excavations were initiated by Pope Pius VII. Following his lead, other popes like Pius IX set up hunts for treasure, adding inscriptions, statues, mosaics and paintings to the Vatican and Lateran museums whereas marble and granite were used for building purposes.

Now a long-abandoned city and an active hub for archaeologists, the older part of Ostia Antica is easier to access by downtown Rome. While close to the modern town of Ostia, it feels remote and is void of modern sights and sounds. Its historic apartment buildings are four or five stories high, easily accommodating the 50,000 residents previously in the city. The cramped space yet intelligent architecture gives visitors a peek into how the people of Rome as well lived at the century B.C. to protect Rome from attacks from the sea. It was later in the time.

Moving on, visitors can walk through the fire department of Ostia Antica, which was also used as a police station with 300 “officers” who were rotated in from Rome for three months. The city is also home to stone countertop restaurants, inviting wine bars with mosaic flooring, primitive “laundries” with built-in tubs where people jumped on their clothes to wash them, and a small forum where legal business transactions as well as pagan worship took place. Over the years, however, the city welcomed other religions, a fact visible by a synagogue which features a menorah and shofar.

The ruins still remain the focus point of Ostia Antica, especially since restoration projects have been set up to restore and preserve whatever is left of the Ancient Roman buildings of the area.  Visitors are welcome to the excavation sites in the city and can easily book guided tours so that they can learn about the history and meaning of what they see. They can also head to the Portus harbor district, which was built by Emperors Cladius and Trajan in the north of Ostia to substitute the once grand harbor.

Ostia Antica is one of the main cities to visit and enjoy the beauty of Ancient Rome’s architecture. While it may seem like a ghost town due to its sparse population, it’s the perfect location to revel in the changes of time over what was once a major city and harbor.