The great fire that swept through Rome in 64 AD destroyed several structures in its path, including the homes of the elite of the time on Palatine Hill. It was at this time that the emperor Nero decided to build a villa, full of splendor and luxury, which gave birth to the idea of the Domus Aurea. Nero lived in the Domus Aurea till he committed suicide in 68 AD. After his death, the villa has become one of Rome’s most well-known historical sites and carries great significance to this day. 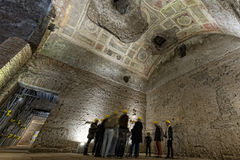 There is considerable debate about the size of the villa, with some historians having described as being less than 100 acres, while others have written that it covered over 300 acres. At the time it was built, the structure sprawled over three hills, including the Palatine. Nero even had a lake built at the foot of the slopes. (Archaeological evidence has deemed this lake sat immediately where the Colosseum resides today-this came about when research took place over the historical record that the Colosseum held mock sea battles, and that the water stemmed from a previous lake/pool that once sat there). The villa also included vineyards, hundreds of trees of different kinds and wide pastures.

The building itself was made from concrete and brick. The ornamentation of the villa was extravagant, to say the least. Semi-precious stones were engraved on the ceilings as well as ivory veneers. The villa featured frescoed walls. Architecturally, the design was immaculate with different themes spread across the structure, giving it a unique and visually appealing appearance. A statue of Nero was also built to be placed at the entrance to the emperor’s palace. The statue was a colossus, 35.5 m tall, and was built by Zenodorus. Today, the actual site of where the statue once stood,is marked, and sits next to the Roman Colosseum. This is how the Colosseum became the “Colosseum” due to the “colossal” statue. (During ancient times it was known as the Flavium Ampitheatre.)

Nero’s Death and the Renaissance Period

Nero’s successors were ashamed of the extravagance of the palace and had the jewels and ivory removed from the structure over the next few years. Most of the area covered by the villa was then filed with earth and different buildings were erected there. These included the Flavian Amphitheatre, Colossus Neronis and the Temple of Venus and Rome.

During the 15th century, at the height of the Renaissance, the splendorous architecture of the Domus Aurea was discovered, almost by accident. Michelangelo and Raphael were just two of the many artists of the time who went underground to explore and examine the structure and also left their names on the walls. Over the centuries, archaeologists have dug through the ground to uncover remains of the Domus Aurea, including the frescoed walls, and research continues to this day.

Over the years, the reputation of Nero as an emperor has been solidified with considerable research. He is known as a ruthless ruler whose only indulgence was luxury. This is the reason the Domus Aurea has come to be known as a symbol of opulence and endless wealth. This is signified in the use of the name of the structure by numerous businesses, including fine wines and hotels. The target market of these businesses is often the society elite, who are aware of the affluence of Nero and his indulgent tastes and habits.

The Domus Aurea was closed down for several years for repairs after some damage to the building caused by the collapsing of the vault of one of the galleries of the villa in 2010, and flooding. Even a couple of years before that, experts expressed concerned about the safety of the structure and whether it should be open to visitors. The result is that the inside of the villa is climate-controlled, with 10oC the standard temperature at all times. Plus, the 100% humidity makes the climate inside cold. You can get a guided tour on the weekend. Visitors are responsible for keeping themselves warm.