You can find the ancient city of Sorano in Southern Tuscany, in close proximity to some of the region’s world famous countrysides.

Ancient, because it stems from the Neoloithic age, although it is most notable for its Etruscan heritage.

Situated in the heart of the Etruscan civilization, one of their most notable and historical testimonies is the “Vie Cave.” The “Vie Cave” is thought to be an epic series of connecting roads dug out of the tufa thereby adjoining the Etruscan cities of Sorano, Pitigliano, and Sovano.

Nearby, you can visit the well-preserved archaeological site in which parts of the illustrious “Vie Cave” can be walked upon. Truly, a remarkable experience!

The site presents an incredible opportunity to explore tombs, view ancient carved statues and artifacts, and be absorbed in the ancient land which is surrounded by a number of shaded dense trees.

The town of Sorano tucked away from the masses of tourism, sits atop its tower of tufa once created from an ancient volcano. From this vantage point, a broad number of rectangular Etruscan tombs can be spotted carved into the rock that sits across the valley, and which must have posed a very difficult exploration route for archaeologists and historians to study due to their obscure locations. 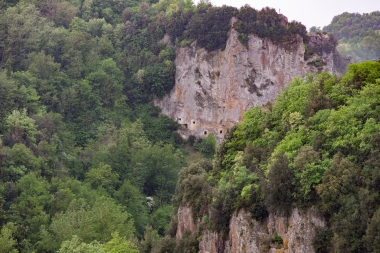 Visiting Sorano is a moving experience. The homes are nestled together and made of stone and red-tiled roofs. The population being relatively small, makes it easy to maneuver around the city practically alone. Paved with narrow cobblestone streets which take you up, down and around moderately narrow slopes, there are several memorable places to visit.

One of the most awe-inspiring things to see is the “Rocca degli Orsini Castle” which has gained historical notoriety, as it serves as a prime example of military architecture emanating from the period of the Renaissance.

Additionally, the “Fortezza Orsini” stands as an enormous fortress from the 11th century.

Upon strolling throughout Sorano, it is fascinating how some of the homes seem to be literally hanging onto the very edge of the cliff.

A wonderful way to conclude a visit to Sorano is to eat at one of the superb restaurants serving only the freshest and most delicious of foods available in the locality.

A walk through Sorano is truly an experience not to be forgotten, and which showcases the city’s treasures that are steeped in history!